PlayStation Vue (often abbreviated PS Vue) is an American video streaming service that is part of Sony corporation. It offers the user multiple TV channels in an over the top (OTT) service. That means they are available without the need for a cable or satellite provider. Because it is over the internet instead of the traditional way, subscribers can enjoy their favorite channels at a fraction of the cost. In this review of PlayStation Vue, we’ll talk more about the service and give you an in-depth perspective to help you decide if this is the service for you.

PS Vue acts as a virtual multichannel video programming distributor, so subscribers are not limited by the market they are in. This is a fairly new concept in the TV industry because just over 20 years ago, the public was still using dial-up internet. At that time, you were lucky to get a single image to download over the internet in 5 minutes. If you look how far the net has come, it is not hard to see why streaming services like PlayStation Vue have become so popular. PS Vue streaming service was announced at the Consumer Electronics Show (CES) in Las Vegas on January 7, 2014. However, it was only rolled out in a limited fashion on March 18th, 2015. Obviously, PS Vue is owned and operated by the Sony corporation. At this time, they are still the only streaming service to offer all 4 of the major US television networks.

Members of PlayStation Vue pay a monthly subscription fee, based on the channels and packages they want. Additionally, you can purchase individual channel subscriptions no matter what package you have. That way, you don’t have to subscribe to the highest package just so you can watch a channel like HBO. The service is only available in the United States. If you plan to travel outside the US, you will need a VPN to access the service.

Prices for this service begin at $39.99 a month. For that amount, you get more than 40 channels. Instead of paying for unwanted channels, you pay quite a bit less than you would with cable or satellite. After all, the streaming industry is not about the number of channels you have, but the ones you enjoy. There are four packages available, and ways to add some individual channels. Though you may add HBO to any package, there are no cost savings available. You can sign up for a 5-day free trial so you can test the service.

Let’s start by taking a look at the PlayStation Vue channel packages: 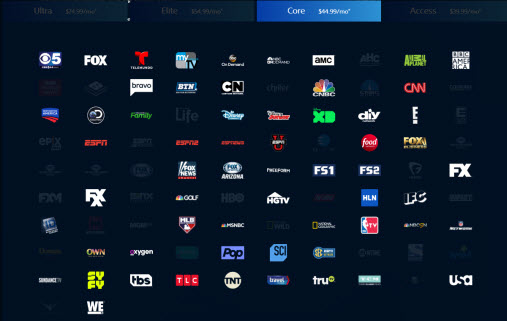 If you choose not to go with the Ultra package, the following stand-alone channels can be added and combined into any package for an additional amount per month.

Español Pack  ($4.99) – This add-on pack can be used with all plans and includes the channels of CINE SONY, CNN in Español, Discovery in Español, Fox Deportes, Fox Life, Nat Geo Mundo, and NBC Universo for just $4.99 a month.

DVR – This is a free service offered with your subscription. There are very few restrictions on what you can and can’t record. The shows or events are kept for up to 28 days after they air. The only restriction to recording involves CBS. They do not allow their programs to be digitally recorded.

On Demand – Many of the PS Vue channels offer content that you can watch on demand. That is great if you have missed a show or movie. You can also use this tool to review previous seasons of a show before the new season airs.

Adaptive HD – PlayStation Vue has a feature called Adaptive HD. It operates similar to Netflix, where it will determine the highest quality of video you can stream based on your connection speed. This can be really helpful if you want to use the service but don’t have as high of a connection speed as others.

The list of compatable devices you can use to watch PlayStation Vue is large. However, we’ll provide you with a list of the most widely known options. The full list is available on their website. They include Apple TV, Amazon Fire TV, Roku, Chromecast, Android TV, iOS, LG web OS, Android, Windows, Mac, PlayStation 3&4, and more. You can see there are many different options to choose from. Keep in mind that some viewing is mobile restricted due to streaming rights and your location. Those will be denoted by a mobile restricted badge. If you have questions, they have a good FAQ section.

As we finish this PlayStation Vue review, we have found the service to have an almost exclusive contract with CBS. As the only one to have all 4 major American broadcast channels and others, this service is one of the most complete. Though the recent price hike was irritating, it is still a good option for cord cutters. It also provides one of the least amounts of disruption from your normal watching habits. We also like the fact that DVR is free and you may watch the service on up to 5 simultaneous devices. All of these factors make it a good value to those that choose to stream instead of keeping cable.